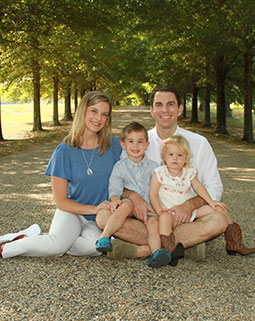 Dr. Lyndsey B. McCaskey is dedicated to providing high-quality orthodontic care to our patients, as well as contributing to the warm environment our team enjoys every day with the special people that come through our door. She has worked hard to gain the knowledge and clinical skills needed to serve her patients well. Her reward is not only helping patients obtain happy, beautiful smiles but also enjoying interaction with her patients that enables her to get to know them better.

During her time at W & J, Dr. McCaskey was selected to be a member of the Phi Beta Kappa and Alpha Lambda Delta Honor Societies, and earned departmental awards for excellence in both biological studies and religious studies. For her athletic endeavors, she was named to the All-PAC First Team for Women’s Soccer and to the First Team of ESPN the Magazine Academic All-District Women’s Soccer Team.

In 2010, Dr. McCaskey obtained her Doctorate of Dental Surgery from Virginia Commonwealth University in Richmond, Virginia. At VCU, she was awarded a research grant, and earned first place at the university’s research competition. After dental school, she completed a two-and-a-half-year orthodontic residency at Case Western Reserve University in Cleveland, Ohio. Dr. McCaskey graduated in 2012 with a certificate to practice orthodontics as a specialist, as well as a Master of Science in Dentistry.

Dr. McCaskey is married to Dr. Adam Goddard, an oral and maxillofacial surgeon.  They have two children, Adam & Clara, and a rambunctious black lab named Gus.

Dr. McCaskey loves spending time with her family and watching her children partake in their numerous sports and activities. She also enjoys serving as a volunteer youth soccer coach for the Butler County Soccer Association, an organization that greatly contributed to her athletic career.  A diehard Pittsburgh fan, she loyally carries her Terrible Towel wherever she goes!

After spending nearly seven years away from Western Pennsylvania, Dr. Lyndsey McCaskey has truly gained an appreciation for the community that contributed to her upbringing. She is delighted to join the family practice and to have the opportunity to give back to the community that taught her the ideals of hard work, dedication, and service to others.